In November 1944, when Tom Phillips became licensee of the Hotel Australia, the Second World War was still raging, leaving him a little low on patrons and desperately short of beer. Even if that improved, he was still missing the right sort of help. 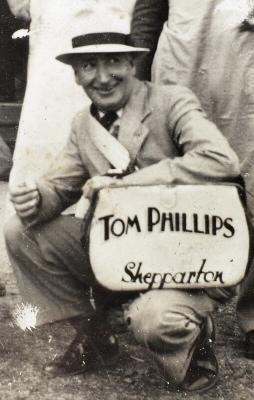 Tom was always a bit of a gambler. Or as this photo of him as a bookmaker shows, not far from it.

On paper Shepparton's Hotel Australia looked like a good proposition. It was well situated in a prosperous town, had a full range of services and Tom had six children he could potentially call on for help.

But wartime beer quotas were in force, three sons and many other would-be patrons were off serving, and his other three children were still in school. Was he biting off more than he could chew with his latest business venture?

The previous owners, the Dunne family, were well off financially and could afford to be choosey who they served beer to, so the one small corner bar was more than adequate for the number of drinkers they served. With the pub well situated on the corner of Maude and Fryers streets, there was potential to attract more pickers and SPC cannery workers, and to increase the bar space. The residential part was also ripe for expansion, the Dunnes having run it as mostly private accommodation for friends. If only there was beer to sell and people looking for accommodation.

In November 1944 when Tom took over, the Second World War was into its fifth year. Even if he had sufficient beer to sell - nation-wide beer quotas had been in force for almost three years - there was a shortage of patrons as thousands of drinking age men and women were involved in the war effort. Like three of his own sons.

Tom and Irene 'Sis' Phillips had six children. As soon as the three eldest, Jack, Reg and Laurie were allowed, they left their 'essential service' jobs in Melbourne and headed off to serve, Jack in the air force, and Reg and Laurie in the navy. While it was assumed they'd be keen and able to work in the pub on their return, there was no telling when that might be. The three youngest, Rene, Don and Brian might also be available one day to help, but in 1945 they were still at school.

Wife Sis had a lung removed a few years earlier, so while generally healthy, she was quite limited in what she could do to help. Tom's own health had suffered during the First World War leaving him unfit for hard physical work. At least initially, Tom would be relying on existing staff, any help he could get from family, and his own efforts. And he'd be hoping the war ended before he went under. 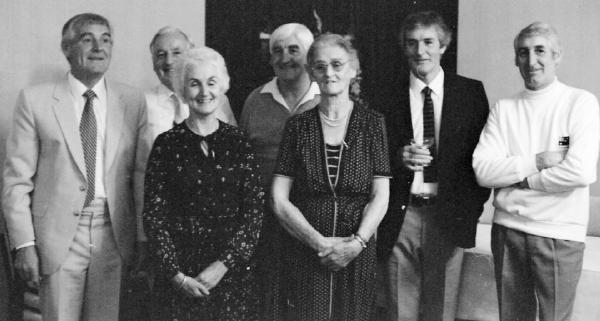 Tom had certainly done his homework. After serving in the First World War, he went to Nyah where he gained first hand experience with beer and billiards. When asked if he would manage the clubrooms for the Nyah Diggers football club, he jumped at the chance. He married local girl Sis McDonald and the couple moved to Shepparton, where they raised their family of six children. Here Tom ran billiard saloons, involving brothers Joe, Larry and Danny, until 1938.

He learned a lot about beer and bars from his first pub venture, the Pine Lodge Hotel in Shepparton East. But it was a small out-of-town pub, and with six o'clock closing in force and the patrons mostly local farmers and orchardists, it was hard to make a decent living.

After the Pine Lodge Hotel, Tom was involved financially in a string of ventures with others. His first experience with meals and accommodation came from the two years he managed the Court House Hotel in Wyndham St, working with well-known local Mrs Mary McInnes.

On 14 November 1944, Tom Phillips became licensee of the Hotel Australia, taking over from Mary Dunne. 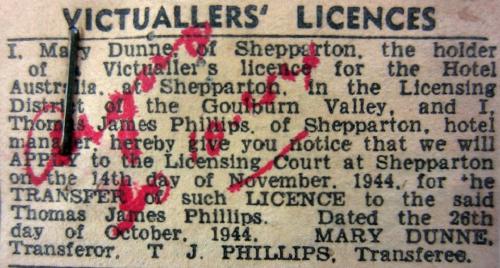 It didn't take long for Tom to get the new letterhead printed up. The phone number was pretty easy to remember.

Sis Phillips's younger sister Bub Williams and Tom's younger brother Joe were a huge help to Tom and his family at the pub.

Bub was very capable and Tom knew it - he had helped her into the Cricketer's Arms Hotel in Mooroopna where she was licensee for three years. In a clearly coordinated move, Bub finished up there the same month as Tom started at the Hotel Australia. So Bub was an obvious person for Tom to call on to help for the first six months after the family was in the pub. She returned later and ran the bottle shop for eight years.

Tom and Joe worked closely together, with Joe following Tom through several billiard saloon and pub ventures over the years. Joe was also an SP bookie, and his presence in and around the pub gave many a punter one more reason to drink at the Aussie. Due to the manner of its acquisition, much of Joe's money was out of sight of the tax man, in safe deposit boxes. This 'Bank of Joe' provided loans for Tom to expand.

This was a far bigger venture than anything Tom had done before, and given the timing, it was a huge gamble. What would he need to do to survive, and to provide for his family? How could he get more beer, and could he build the Hotel Australia up to be more than just your average country pub?

And would his tendency to push the boundaries with the law be his saviour or his undoing?

By the time Tom saw the two guys in suits, it was too late - they'd been sprung. With no tipoff that the police gaming squad would be making one of their impromptu visits, Tom and his brother Joe were caught at the main bar right in the middle of an SP bookie transaction. This could have been very bad news. Luckily, in the ensuing court case, Ray Dunn got them off as usual.

SP (starting price) bookmaking was very popular with the punters as they didn't have to go to the track to place a bet. Unfortunately it was illegal, and any publican found knowingly hosting the activity on or near their premises could face a hefty fine or lose their licence.

Tom Phillips explains: "Mum's word. But you might remember 'Little Sport' (his brother Joe) and I had a slight mishap on the premises the day the flying squad comes through looking for SP bookies and catch us red-handed. Well we have to front Georgie Catlow, the beak, but Ray Dunn appears for us and duly gets us off as always. After we all have dinner together back home at the Australia Mr Dunn says, 'Well, TJ, you'd better put in 50 bucks to the footy club and whatever you think's a fair thing to me.'  That's how you see that in the Richmond annual report."
(Tom Carey, 'At last, 25 years ago, it's 1968', The Shepparton Advisor, 31 August 1993, p. 45.) 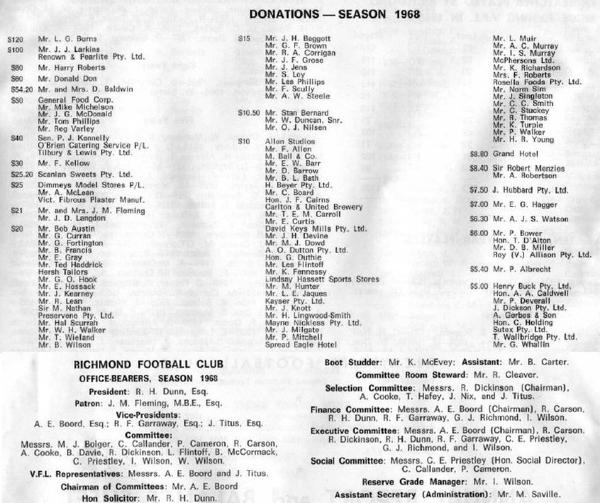 In the 1968 Richmond Football Club annual report, Tom's $50 donation is well above of the likes of Sir Bob Menzies, Clyde Holding, Jim Cairns and even CUB.

From Tom's short time as a licensed bookmaker - he had to stop when he got involved in pubs - he knew the importance of laying off risk and perhaps this led him to cultivate potentially useful friendships. He had dinner each Friday with magistrate George Catlow who it turned out later heard the case. And he had a good relationship with Richmond Football club president and hot-shot lawyer Ray Dunn who helped Tom over this latest hurdle, getting him off as always.

But back in November 1944, while Tom had a new pub, he was in desperate need of more patrons and more beer. Fortunately, their numbers would eventually explode in the main bar ...