A decade before Gough Whitlam had a drink in the main bar, Sir Rohan Delacombe did the same in the function room. 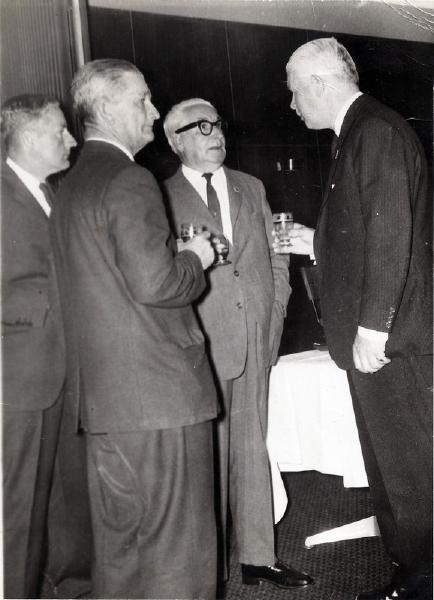 In October 1963, Sir Rohan was only five months into his term as Governor of Victoria and was in Shepparton to lay the foundation stone for the new civic centre. Nicknamed 'Jumbo', Sir Rohan was a Major General and altered his schedule to meet with the local RSL while in town. The recent Hotel Australia renovations and Tom's own military background made his pub the ideal venue to handle the expected crowd.

The 1962-63 wave of renovations greatly expanded the opportunities for hosting wedding receptions and all manner of other functions - like Sir Rohan's visit. This allowed the business to grow beyond the traditional liquor sales and accommodation.

In 1966, just after the introduction of decimal currency, the bill for a wedding reception would include a charge of $3.55 for each guest. A pianist would cost you $8.40, you could get a whole orchestra for just $24.00, and as now, drinks would be a substantial component of the bill. And the receipt would be signed 'M Phillips'. Marion was Don's wife and ran the show as far as in-house functions were concerned, with occasional support from Don and others. Notably, when Don and Marion took sons Trevor and Paul on a six month around the world holiday, the 'M Phillips' was Maureen (Brian's wife), who stepped in and by all accounts did an excellent job in Marion's absence.

Those who worked during the functions were sometimes regular staff, but often they only worked functions. There was Bev Saloma, Kevin and Des Poustie, Tom Quinn. And lots of Magees: Peter, Dennis, Brendan, Joe and Adrian.

And when the function room wasn't being used for weddings, why not run a handball competition? 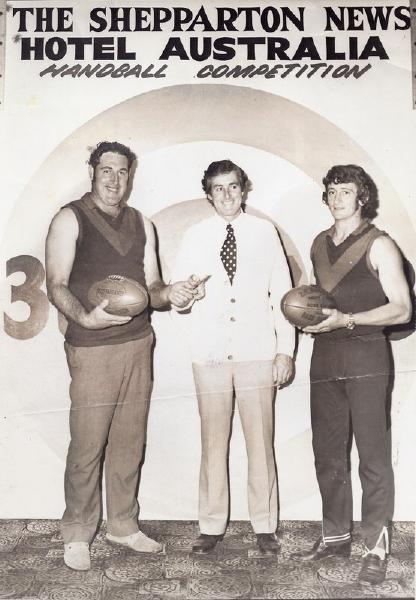 Or a French themed night featuring the Can-Can ... 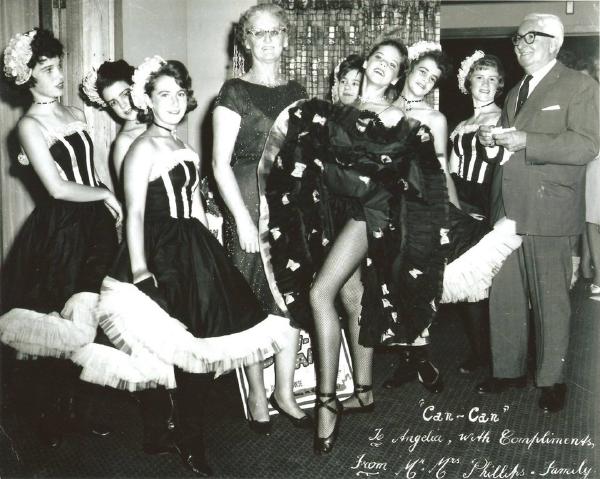 While Marion presided over in-house functions, often the pub catered for events that were held elsewhere. Sometimes a 'niner' (nine gallon barrel) was requested for delivery to a specified location. Given a certain level of skill was required to tap a barrel without wasting the precious liquid, and to pour a decent beer, often the delivery man was asked to stay and help. Frequently one of the drinking party happened to be a barman at the pub, and being skilled in 'the art' was happy to oblige.

A dilemma often faced by organisers of such functions was whether to order a nine or eighteen gallon barrel. A Niner would be good for the pocket, an Eighteen would boost the ego. 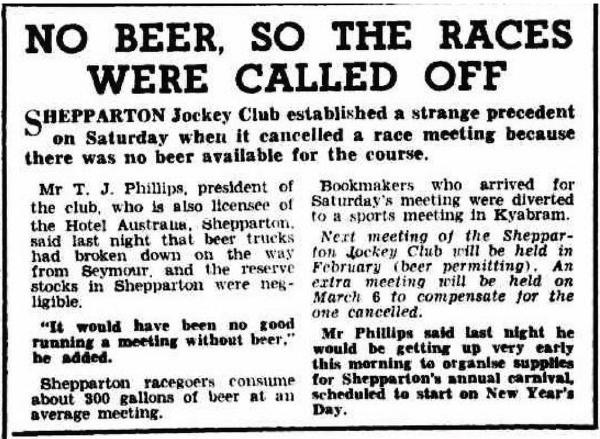 Providing a bar at horse racing events was good business in the family's early years in the pub. Eventually though, the courses established their own bar and catering facilities. When Tom could no longer take his beer to where the punters were, he enlisted his brother Joe to make sure his beer drinkers could have a punt.

When income from the racetrack was no longer available, other types of events were used to fill the bill - like footy.

Congupna had just won the premiership and were celebrating hard. Laurie had already taken a barrel up at 5 o'clock, but around 10 they phoned to say they needed another one. Laurie took it up and decided to stay around for a bit. When well-known local Keith Reynolds started bragging about how good a drinker he was, somebody dared him to drink a big catering size teapot full of beer. With his mates egging him on, he rose to the challenge. As he was glugging away, the teapot covered his face so he couldn't see around him, and on the sly Laurie put the pluto in the spout and started trickling more beer in. Keith kept glugging, Laurie kept pouring, and his mates thought it was the best thing they'd ever seen as he struggled to empty the never-ending teapot.

The pub often catered for the Goulburn Valley League footy grand final at nearby Deakin Reserve. During the 1950s, Deakin Reserve also hosted the popular annual sports carnival which culminated in a big cycling event.

During the 1950s, cyclist Sid Patterson was a big drawcard for the New Years Day sports carnival held at Deakin Reserve. The pub got to provide beer for the officials and riders after the staging of the prestigious Shepparton Wheel Race. One year when it was Laurie's turn to work there, he was a little nervous that he had prepared everything for the rush following presentations. All the glasses were lined up ready to fill and Laurie had a jug of beer in each hand ready to pour. Sid Patterson was first to walk up. But instead of picking up a glass, he just said 'thanks', grabbed a jug out of Laurie's hand and skulled the lot.

Several things were needed for this type of external event to be practical and still make money for the pub. Steel barrels rather than the wooden kegs they initially had were easier to handle and provided a more consistent beer quality. The 'Pluto' hand-held beer gun made it easier to dispense. The truck allowed convenient delivery of the beer, glasses, trestle tables, etc. And crucially, there was the family - with most of the events held on weekends, public holidays or in the evening, finding and paying staff would make it unviable. With up to five boys to share the load, the Phillips family probably had the edge on other pubs in the area for this type of activity.

From the 1950s right through to when they sold up, the Phillips family saw a huge number of changes in how people drank and dined - which in turn changed the pub. Increasing affluence was a big factor, as was the desire to eat and have a drink at places other than a pub or one of the few licensed restaurants. There was also a slow but steady shift from beer to wine, especially dry white wines. And by the early 1970s, women openly questioned why they weren't allowed to buy a drink in a public bar. 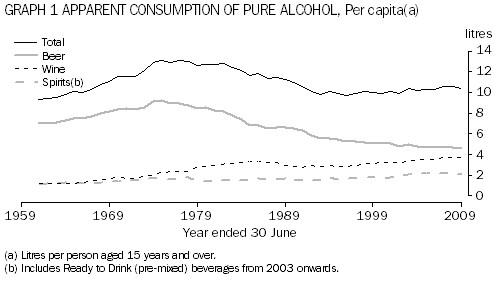 Initially, the dining room was in Maude St next to the main bar and seated forty diners. There was a smallish kitchen next to the dining room. When the now twenty-year-old dining room was moved in the late 1950s to make way for the long bar, the kitchen was also enlarged. This helped cater for more casual diners and for the extra dozen or so guests following the addition of bedrooms in the early 1950s.

The 1962-63 wave of renovations saw gutting of the ground floor central area between the main bar and saloon bar, and the addition of a more modern entrance foyer and dining/function room. This allowed people to spend on more lavish or bigger wedding receptions. And all manner of other parties that might previously have been held at home.

During the same renovations, the lounge on Maude St took over the passage way (the old entrance) and was later known as the TV room. It was here Phillips family and residents dined when there was a function on.

Demand for meals grew, with a 1972 report commenting:

It was stated that a strong demand existed for meal service. The average weekly meal supply consisted of 100 counter lunches, 30 counter teas and 300 dining room meals - support from functional dinners accounted for approximately half of the last category.

In what would be the last major renovations undertaken by the Phillips family, most of the Maude St side was altered in 1972. As mentioned earlier, the northern end of the now split long bar provided an expanded area for quieter, more relaxed and female-friendly drinking and eating. The previous ladies lounge made way for an expanded cool room and a new bar, 'The Arches', which together served an increasing quantity and variety of wine to go with meals served in the expanded dining area. The Arches also serviced the large function room via concertina doors.

Edi (Edith McGrillen) was a waitress at the pub from early on until the late 1960s. Described as a lovely lady, small and dainty, Edi lived in Edward St not far from the pub. Cynthia Lewis followed Edi and was there until the pub sold, though by that time was working upstairs. 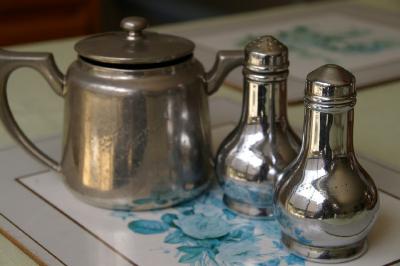 If you look really hard, you might just make out part of 'Hotel Australia' engraved on the sugar bowl and salt & pepper shakers.

While the first cook recorded with any certainty during the Phillips family's time is Mrs Chatterton, for a short time before her there could have been a cook called Jim. It must have been interesting times for the cook in those early days, preparing meals for the family of eight, and with wartime shortages and a tight budget.

May Jones was officially the laundress, but she was also an excellent cook. She used to give regular cook Mrs Chatterton the day off on a Wednesday. Everyone, Phillips family and long-term residents, looked forward to Wednesday night, when her fricassee of lamb, braised steak and onions and all sorts of other delicacies were so good they had trouble deciding which to have.

Her wine trifle was also a winner - for everyone. When she made one these, she'd naturally ask for a bottle of sherry. Then another. By the time the trifle came out, May was quite merry!

Mavis Godkin arrived as cook in the mid-1960s. She was a big woman - maybe that was a good sign for her trade. The next cook was Ada who must have been quiet or short-term as no one recalls much about her or even her last name. Doris (Dorothy) Scripps was a kitchen hand not a cook, but would step into Ada's role when Ada was on holidays.

Billie English - who was English - was next. During Billie's time there was also a waitress by the name of Lilo (a shortened form of Liselotte and pronounced 'Lee-lo'). Maybe it was an English-German thing, but Billie and Lilo didn't get on all that well. Lilo was from East Germany and with husband Horst had jumped the wall. Lilo taught a young Trevor Phillips enough German to get him into trouble during a 1984 holiday to Germany.

Carmel Niederle, also described as a big lady, followed Billie in the kitchen. Carmel later worked as a cook at the Terminus Hotel.

It was hard - some would say impossible - to please everyone all the time, especially with cooking, so it was inevitable that cooks would come and go. But in an attempt to please more of the people more of the time, they appointed Con. Constantine 'Con' McCloskey was not a cook, but a chef. He introduced meals with exotic names like 'Veal Cordon Bleu', but not everyone was impressed.

The pub threw a Christmas party every year for staff with everything laid on. One year it was being held at Don Ducksbury's place, which was big and had a pool. As the drinks flowed, Bev Soloma's hubby Mick pushed Con into the pool.

Perhaps that was a bit harsh.

Not all parties were held where they were supposed to be ...

Previous chapter: All About the Beer